New Castle’s first development plan was adopted in 1958, and its second was adopted a decade later in 1968. Throughout the 1950s and 1960s, municipalities in the New York Metropolitan region experienced unprecedented population growth as young families traded in their urban lifestyles for a quieter, suburban existence. With its peaceful, single-family residential neighborhoods and proximity to New York City, New Castle provided an optimal setting for this kind of experience. Both the 1958 and 1968 plans acknowledged that growth in the Town was inevitable and established policies that would guide growth in a manner to preserve and enhance the qualities that had attracted its residents to the Town in the first place.

The Town’s next comprehensive plan, the Town Development Plan (TDP), was written in 1989. Between 1956 and 1984, the percentage of land area actively developed in New Castle increased from approximately 34% to 65%. While much of this increase was due to the development of single-family residential housing, hundreds of acres of land had also been committed to open space preservation, recreational use, or watershed protection. Despite an increase in development and land area actively developed, the Town managed to preserve its residential character and natural feel. Like its predecessors, the preservation of these aspects of the community was the main objective of the TDP.

By the writing of the TDP, the Town faced a different kind of development pressure than it had in previous decades. In particular, New Castle was facing pressures to diversify its housing stock, the majority of which was single-family, and encourage the development of alternate housing options to serve the needs of emerging demographics. The TDP encouraged the development of multifamily housing units, but never lost sight of its primary objective: to manage anticipated development to preserve the Town’s residential character and natural feel. As such, the TDP recommended the regulation of housing densities, subdivision design and building bulk to ensure that new multifamily housing developments fit within the community context, aesthetic and scale.

The issues we face in New Castle today are at once very similar to and also very different from those we faced in the past. Today, the preservation of the Town’s residential character and natural condition are still of utmost importance, as is the protection of the Town’s environmental features. The Town also faces the same challenges in meeting the housing needs of changing demographics, including seniors, workforce employees, and young families. Meanwhile, the 21st century has introduced a host of new challenges that have changed the way land use and community planning must be approached.

The explosion of the Internet and online shopping has revolutionized consumer habits. The vast supply of products available on the World Wide Web and the convenience of shopping from home has consumers choosing to shop online rather than in person with increasing frequency. As a result, e-commerce is playing a large role in transforming the American “downtown,” and is affecting the actions local businesses must take to remain relevant and successful in this new market. At the same time, as millennials’ (the younger generation’s) economic self-sufficiency increases and the baby boomers (older generation’s) age, these populations are becoming more interested in amenities, housing, services and entertainment options, that are accessible without a personal vehicle or through public transit. There is a trend to introduce “healthy living” and “active lifestyles” into everyday actions. It is important that the Town’s hamlets evolve in accordance with these demographic and economic trends.

In addition, even in communities like New Castle that are relatively free of crime and security threats, the September 11, 2001 terrorist attacks and increasingly frequent violent events across the country have elevated public safety concerns to the extent that they have become an important consideration for community planning. Municipalities have also developed more robust environmental disaster and adaptation plans to combat increasingly frequent and intense weather events. Finally, a sophisticated and comprehensive understanding of global climate change has emboldened localities to take action to curb air emissions, implement sustainability measures throughout town operations, and encourage more responsible resident behavior.

The 2017 New Castle Comprehensive Plan continues the rich history of community planning and sets forth the New Castle Community’s vision for preserving the Town’s strengths and addressing the Town’s future needs for the next fifteen to twenty years.

How We Got Here - The Community Vision

Although a quarter of a century has passed since the writing of the TDP, New Castle remains remarkably unchanged in many respects. Most notably, the Town has retained its bucolic feel and low-density residential character. Chappaqua and Millwood continue to serve as the Town’s main centers of retail activity and community gathering. Through the purchase or acquisition of a number of undeveloped properties, the Town has dedicated over 200 acres for open space and recreational use in New Castle, enhancing both active and passive recreational opportunities and fortifying the Town’s natural condition. The preservation of these aspects of the Town – its residential character; bucolic, natural, peaceful sense of place; and healthy environment – remain the focus of the 2017 Plan. These features, along with the excellent schools and the Town’s proximity to New York City, are the aspects of New Castle that attract new residents and are most prized by community members. The 2017 Comprehensive Plan combines best practices in sustainable planning with community input to set forth policies that directly address the preservation of these enviable assets for generations to come.

Specifically, the 2017 Plan establishes updated goals to develop a variety of housing types at various price points in locations that provide easy access to sewer and water infrastructure, other amenities and alternative transportation. The Plan acknowledges that large-scale residential development of any kind in more remote, undeveloped areas of the Town faces a myriad of challenges, including but not limited to the following: (i) significant environmental constraints (such as sensitive wetlands and wetland buffers, steep slopes, public drinking water watersheds and aquifers); (ii) the lack of existing infrastructure (such as public water and sewer utilities, substandard roads in terms of surface, width, drainage and sight lines); (iii) little or no access to public transportation; and (iv) limited fire protection when public water is unavailable.

All of this is called for with the primary intent of the preserving New Castle’s bucolic character of low- density, development and enhancing the community’s sense of place. The Plan also establishes certain goals to address the changing aspirations of the community. The Comprehensive Plan takes the position that there is a way to balance these goals to achieve the best outcome for the community as a whole.

The 2017 Comprehensive Plan contains a strong foundation based on community input. While the actual Planning Document took just about a year to produce, the Town began obtaining public input well before pen was put to paper. In 2013, the Town Board formed a Comprehensive Plan Steering Committee composed of a core group of residents who were charged with providing input to guide the update process. In addition, volunteer work groups were established to analyze the 1989 TDP and assess what aspects of the plan were still applicable, what had been addressed and which aspects of the plan were no longer relevant. Also if inclined, the volunteer work groups were challenged to identify issues that were new and not realized previously. At this same time, the Westchester County Department of Planning selected the Town of New Castle to participate in its Comprehensive Plan Base Studies Program. Once the initial outreach was completed and the Town’s Base Studies were delivered, the Town worked with the Pace University Land Use Law Center to conduct a year-long public outreach process to document residents’ goals, objectives, and vision for the Town. A myriad of public and stakeholder meetings were held through May and June of 2014 to document residents’ goals, objectives and vision for the Town. Opportunity was also provided to residents to submit comments through web-based media.

Pace Land Use Law Center produced the 2014 Public Engagement Report which synthesized the participants’ most significant concerns and planning strategies. The overall themes from the public engagement process formed the base policies and objectives of the draft planning document. From 2015 to 2016, the Town of New Castle convened public workshops to solicit feedback on the policies and objectives of the draft comprehensive plan.

How the Comprehensive Plan is Structured

This plan is founded on the desire for New Castle to be a sustainable community. Sustainability is something that is long lasting and can withstand time. This intrinsically recognizes that there is a relationship between social, environmental and economic aspects of the community. In 2015 when we started pulling together the public engagement report, the Strengths, Weaknesses, Opportunities and Threats (SWOT) analyses of the TDP and the County Base Studies we thought about the interrelationship of the “silos” we clung to in the previous comprehensive plans. We examined six different regional sustainability frameworks ranging from LEED-ND to the Mid-Hudson Regional Sustainability Plan and determined that the American Planning Association Comprehensive Plan Standards and Best Practices provided the most complete sustainability framework, encompassing the main tenants of all the other frameworks and plans to position this comprehensive plan in a manner that will align with Federal, State and regional planning objectives.

The Implementation Section of this website identifies the actions that should be implemented to achieve each of the goals. The actions, set forth in the Implementation Table, will be incorporated into the yearly Town budget process. As part of the budget submission for the Development Department, the Town Board will receive recommendations based on current work programming associated with the Implementation Table and will be given the opportunity to review and budget for those specific actions that it deems priority for implementation during the following year. Once identified by the Town Board, the prioritized action items will become part of the daily Town work program (handled by professional staff or consultants). It is important to understand that undertaking actions may lead to additional actions that would be added to this table or may result in the removal of actions that are currently listed. As such, the actions are the elements of this plan that will change more frequently over time and will be revisited in association with the Town’s yearly budget process. 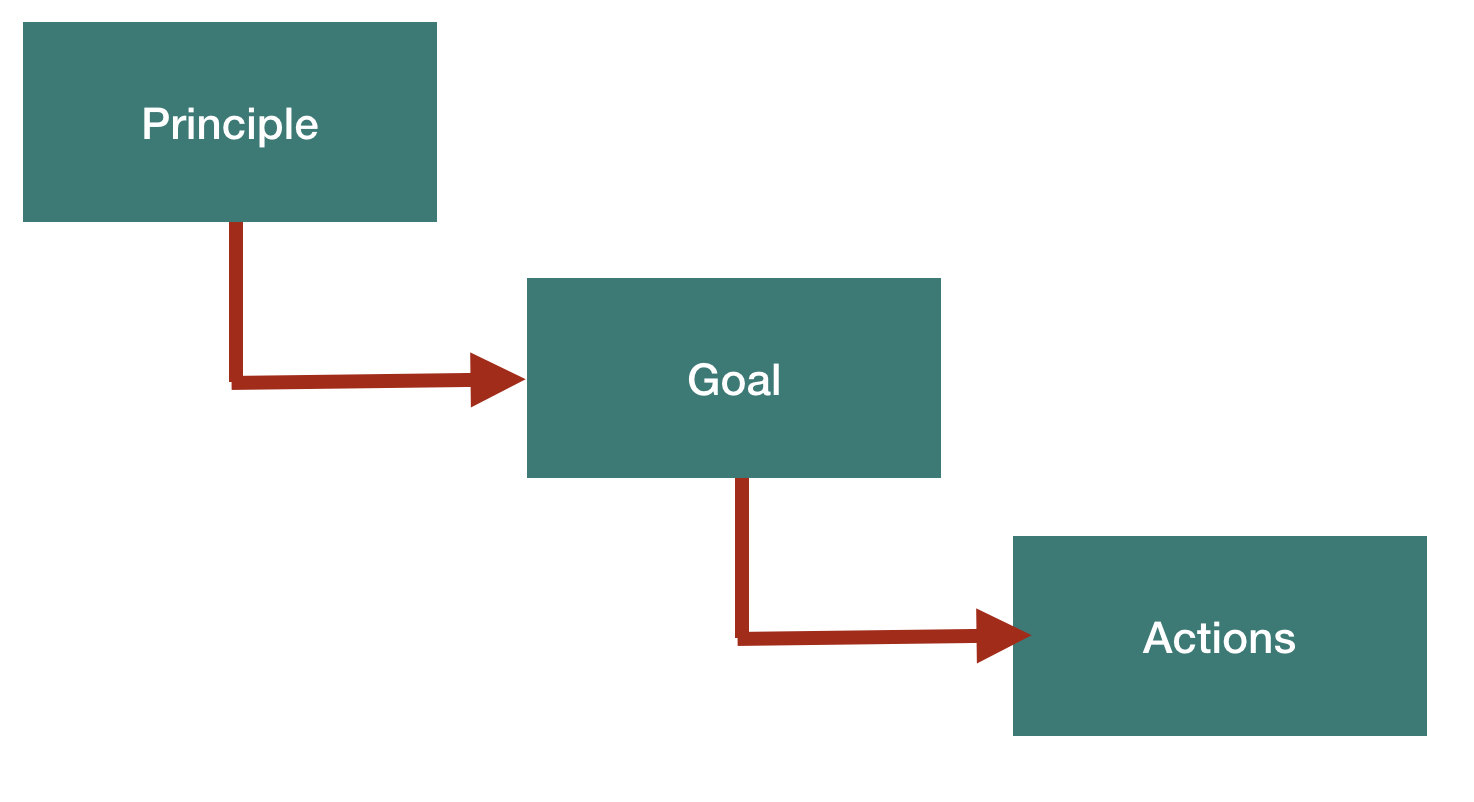